Surrogacy laws in Australia vary on a state to state basis. So, one really has to pay attention to the regulations and legislation of the state in the same regard. Still, in general, only altruistic surrogacy is permitted in most of the Australian states where the intended parents cannot pay the surrogate mother in Australia more than her incurred medical expenses.

Is surrogacy legal in Australia?

As mentioned above, surrogacy is a state subject in Australia. For instance, Western Australian surrogacy law states that before a voluntary surrogacy agreement can be signed with a gestational carrier, a legally binding “Surrogacy Arrangement” must be signed by both parties.

Moreover, the following requirements must be met, among others, for these agreements to be valid: 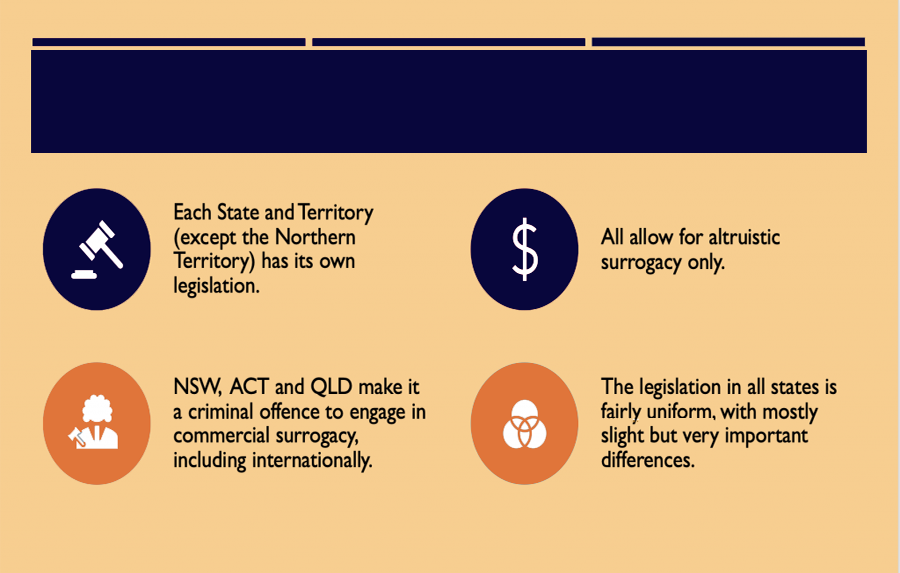 If the parties have followed the above-described procedures to enter into a legally binding Surrogacy Arrangement, the intended parents may petition the court for a Parentage Order. Moreover, the surrogacy law in Australia varies depending on the state, but in Western Australia, for example, a Family Court application must be made no later than 28 days and no later than 6 months after the child is born.

In what situations intended parents seek parental orders in Australia?

The intended parents’ only recourse is to ask the Family Court of Western Australia for a Parenting Order if the birth mother refuses to give the child to them after birth. This is incredibly difficult and fraught with danger, especially when the birth mother has formed a strong emotional bond with the child and is able to parent her on her own on an emotional and financial level.

It is likely that the family who organized the surrogacy may be able to obtain orders with regard to the child living with them, parental responsibility for long-term parenting decisions, and any other similar matters relevant to the child’s welfare.

On the other side, surrogacy is accepted as legal in the majority of Australian states and territories. Therefore, surrogacy must be performed with the child’s best interests in mind.

Other key legal considerations regarding surrogacy in Australia

Domestic commercial surrogacy is prohibited in all Australian jurisdictions, with the exception of the Northern Territory (where no legislation exists). In other words, it is forbidden to compensate anyone in any way for their capacity for reproduction as per surrogacy law in Australia. Moreover, there are no paid surrogacy services available for women who want to carry the child for financial gain.

State to state variation of surrogacy laws in Australia

Surrogacy laws vary on a state-to-state basis in this part of the world. In the Northern Territory, there is no surrogacy law in force at the moment. On the other hand, Victoria and South Australia have changed their laws, and Western Australia is about to do the same.

The average age of a surrogate is over 25. Moreover, it is not necessary for a surrogate to have her own child before becoming a surrogate mother in Australia in Queensland, New South Wales, or South Australia.

In Tasmania, surrogates who are locals are mostly preferred by the intended parents

In Victoria and Western Australia, unless there are exceptional circumstances, intended parents must use a surrogate who has already given birth.

Since each state has its own regulations, there is no federal Australian surrogacy law. Moreover, surrogacy laws in every state are based on the same fundamental principles, which are as follows:

In Western Australia, agreements must be completed and signed by both the intended parent and the carrier before a voluntary surrogacy arrangement can be entered into. Besides, the following requirements must be met for an agreement to be considered valid:

Surrogacy agreements in Queensland are governed by the Surrogacy Act 2010, which was passed in 2010. As per the law, a person may enter a surrogacy arrangement if they meet the criteria below:

South Australia’s surrogacy laws were established by the 1975 Family Relationships Act, which was approved by the Australian health ministry. According to the law, a person may enter a surrogacy arrangement if they meet the criteria below:

Surrogacy practices in Tasmania are outlined in the Surrogacy Act 2012. According to the surrogacy laws in Australia for this state, a person may enter into a surrogacy agreement if they meet the following criteria:

Surrogacy laws in Victoria are governed by the Assisted Reproductive Treatment Act 2008, which was passed in 2008. As per the law, a person may enter a surrogacy arrangement if they meet the criteria below:

State with no Surrogacy law in Australia

In the Northern Territory, surrogacy is prohibited due to a lack of legislation.

Surrogacy laws in the ACT

In order to enter into a non-commercial surrogacy arrangement in the Australian Capital Territory, the following requirements must be met:

The surrogacy procedures in New South Wales are outlined in the Surrogacy Act 2010, which was passed in 2010. According to the laws, a surrogacy agreement cannot be entered into until the following conditions are met:

How can we help?

With so many variations around Australia’s surrogacy law, we at become parents will ensure the best legal support and assistance for you at every step. That said, we will take care of the rest while you get along with your journey to pursue your parental dreams. To arrange a free consultation, get in touch with one of our coordinators today!